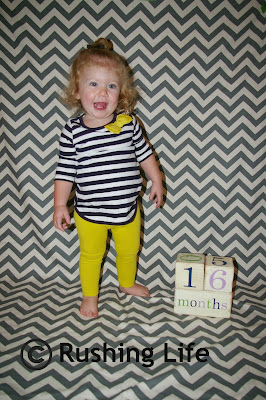 More updates on my little toddler...
Speech: Bimmer now says bear, car, key, cookie, shoe and socks. (Although socks comes out as "sex" sometimes, so we're working on it!) And I have forgotten for a few months to note that she says "bup" when she wants up. Always throwing in an extra "b" into words! She tries really hard to say "bird" but it always comes out "bo bo." Whenever she tries to say words with an "L" in them, she sticks her tongue in and out trying to make the sound. She makes a "sh" sound for "fish" and has been doing that for awhile. And she says "bee" for any bug she sees. She is very intent on asking now what things are (I'd attempt to spell the noise she makes, but it's just not gonna work - but I understand what she means) and tries to repeat. Oh yeah - and she now calls herself "Dee Dee." A few of the kids in her class call her that as well. I don't love it, but hey, I called myself "Tee Tee" when I was little. My favorite is how she says elephant. It comes out sorta like "uh la la la" and there's lots of tongue action.
Development: About a day after I posted her 15 month update, she took off running. Literally. It's so cute. She scoots all over the house and I just love the pitter-patter of her feet. She has figured out how to get down off the couch or the bed, which is a little scary for Mommy to watch! Still hasn't quite mastered getting up, but that's just when she throws her hands in the air and yells "bup" over and over until we put her there. So spoiled! The biting has definitely started to calm down, which is exciting. I was getting so embarrassed by all of that! The doc has also hinted at wanting her to be off her bottle by 18 months. She currently gets one when she wakes up and another before bed. Sometimes Puff would sneak her one in the evening or before a nap on a weekend. That's gotta stop. (Although I was bad about it when she was sick - how can you deny a sweet baby with a fever her "ba ba?") So we've nixed everything except for the AM and PM bottle. The AM bottle will be next to go, but I'm holding on to that night time bottle. It's more for me than for her, I think.
Food: She is definitely becoming a picky toddler when it comes to eating. The only real new thing we've tried this month was fish sticks, and she was not a fan. She doesn't like chicken nuggets either. Oh, she did try ranch dressing. That was a hit. She kept reaching over to my plate to dip anything and everything she had to eat into it. I can't blame her. I'm always at a bit of a loss when it comes to feeding her. Breakfast is normally cereal or a cereal bar. School gives her snacks, and those are typical things like Goldfish, animal crackers, and Cheerio's. Lunch is normally turkey or ham with cheese and crackers. Or sometimes a Sunbutter sandwich or a grilled cheese or some pasta. Always fruit. Lots and lots of fruit. Dinner, however, is the time she doesn't seem to want to eat anything we give her. The only things that are always hits are hot dogs or peanut butter toast. Sometimes, dinner is a few bites of whatever, and then the rest in blueberries. That kid could eat her weight in blueberries and bananas. I realize I need to get better about the veggies. I'm horrible about the veggies.
Play: Bimmer's favorite thing to do these days is to read books. We're always trying to buy her new ones if we see something we think she would like. Her favorite is a Sesame Street one about going to the zoo that I had picked up in the $1 bin at Target months ago. She also loves a Bob Marley one called "One Love." As for toys, she got a new "uh la la la" in St. Simons that she has taken to carrying around with her. We also got her a Melissa and Doug puzzle in Savannah that was a saving grace in the hotel some nights. We also scored her a new bath toy that she likes from some European company. It's a net that scoops up "bugs" in the water. Anything that I can get to help her with her development.

Posted by Gail at 8:12 PM
Email ThisBlogThis!Share to TwitterShare to FacebookShare to Pinterest