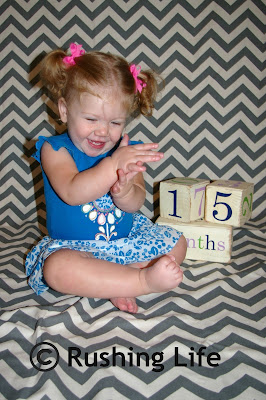 After doing last month's update in bulleted form, I realized that's the easiest way for me to do it. I can draft in an email and add to it when something occurs to me. So, at least for this go-round, we are doing it this way again. My sweet little baby... now a toddler. An independent, knows-what-she-wants, kinda gal. Puff and I love her to pieces. More and more every day... just the way it should be.
Stats: Bimmer had her 15 month well-baby visit and shots this week. She is 26 lbs. 8 oz. and is 31.5 inches tall. It puts her in the 96% for weight and only the 80% for height. I'm not convinced the height was done correctly, since she was super wiggly and we had a different nurse who didn't seem too concerned. The doc said she looks good and we'll go back in 3 more months!
Food: New foods this month that she likes include cheese ravioli, corned beef and pizza. She ate some chicken from Zaxby's. Apparently Mommy's chicken isn't as good. She is iffy about orange juice. She has also decided she no longer likes hamburgers. At least at home anyway. She'll eat it if I send it to school for lunch.
Talking: She says "melma" or "momo" when she means Elmo. (And every cartoon character is Elmo.) She says "ny,ny" for "night night." She tries to moo and says "baa" for a sheep. One of her favorite things to say is "duck." She gets so excited when she spots one in a book, and forget it if she sees one in real life. She tries to say "belly" but it never comes out quite right. And right now, we are in a "yeah" stage. Any question you ask her, she pretty much says "yeah." Much better than the alternative! Oh, and did I mention last month that sometimes when she says "bye" she says it with a southern accent?
Comprehension: I swear the kid learns something new every day. If you say "outside," she goes to the back door. If you say "bottle," she goes to the fridge. If you say "bath," she goes to the tub. If you say "snack," she goes to the kitchen (and promptly opens the cabinet and pulls out the box of Cheerio's). If you say "mail," she goes to the front door. She knows what it means when you ask her to stand up, sit down, or look up. She can point on command to her head, nose, belly, ears, mouth, feet and hair. If you say "brush your teeth" she first grins with her teeth showing and then rubs her finger back and forth on them. Then she runs to the bathroom.
Development: With her gross motor skills, she is starting to be awesome at climbing. The park is the best example... she will figure out a way to get to the top of that slide. Because she wants to go down it. Be it going up the stairs, the right way, or by trying to walk up the slide itself. She has been trying more and more to throw things... some things we want (like a ball) and some things we don't (like a bottle). She definitely throws mini temper tantrums sometimes and is working on her high-pitched, bloody murder scream. She likes to arch her back if you're holding her and she's upset, so she about tumbles out of your arms. Always scary! If you ask her to help, she is more than willing and super excited to see what you are going to let her do. If it's out of her normal realm of duties, she is ready to learn. Oh yeah, and I call it "running" so that's what it is, but it's probably more of a swift walk that is similar to running. It's close enough. She's super mobile. And getting faster by the day. The one skill we *must* work on that Mommy has been putting off... eating with a spoon. It's gotta happen. I have to suck it up and accept there may be a mess.

Posted by Gail at 1:31 PM
Email ThisBlogThis!Share to TwitterShare to FacebookShare to Pinterest

Man she is growing up quick! It's hard to believe that Bri was her age when I got pregnant with Jonah! *wink wink*