My drink of choice since the summer of 2001 has been Malibu rum and orange juice. I hardly drink anything else. I can thank a super hot Austrian bartender named Wolfgang for this. 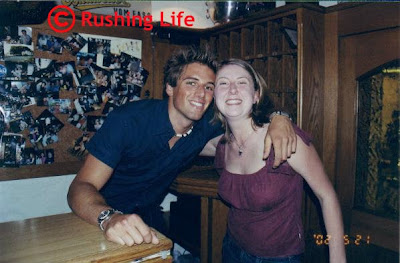 Back in college, there were certainly plenty of parties that started with a Power Hour followed by nights spent out at the bars until the wee hours of the morning. The photos from those years are pretty hysterical. (I am glad Facebook didn't exist way back then!) Since the moment I finished my classes, however, my drinking hit a brick wall. Sure, there were occasional nights of debauchery for a bachelorette party or some other celebration. But I have never been drunk with Puff. Nor have I seen him drunk.
Puff is a bit of a beer connoisseur, so he will have one or two, here and there, with dinner at a restaurant. I rarely order a cocktail with a meal, since orange juice doesn't pair well with a lot of food, plus, they're expensive. We are definitely not anti-drinking. We don't have issues with people who drink more frequently than we do. I gave up all alcohol in May 2011 when we were starting to try to conceive Bimmer. My friends brought me a bottle of Malibu to my hospital room in celebration once she was born. It took me awhile to even get around to opening it. 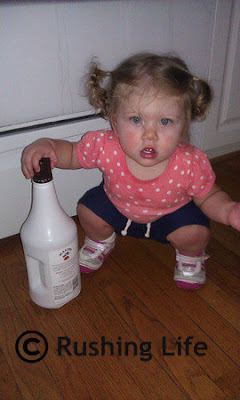 I mention all of this backstory because lately, I have realized just how much other people drink! And I don't have a clue how they (1) stay as skinny as they are, and (2) drink that much in general. One of my good friends actually goes home and has a cocktail almost every night. I couldn't even fathom. First off, I have an insane toddler running around, so getting tipsy probably wouldn't be in anyone's best interest. But I also don't have the desire to drink every night. It would make me fat and lazy and tired. I don't like waking up with dry mouth.
Then there are my co-workers. I love them all dearly, but they go drinking more than any people I have ever met. My boss will routinely bring in champagne to make morning mimosas. And then he'll treat people to a round of drinks (or four) at the bar in the middle of the afternoon. When we have manager outings, there are always cocktails at 9am and more at lunch. I have had more alcohol in the 10 months I have been at this job, than I probably had in the past 3 years combined.
And I can't do it anymore.
I've tried to keep up. I've tried to play it cool that I am super interested in going out with them for cocktails. I don't want them to make fun of me or to start pregnancy rumors. I've got some tricks... I will ask the bartender to go light on the alcohol. Or I'll secretly be happy when the bar doesn't have Malibu, so I can act like I don't have any other option but to have a water instead, since they don't have the liquor I prefer. Even times when I want to have a drink, I only want one or two, not seven. It blows my mind to see these girls drink the way they do and then function the next morning. A lot of them even have small children!
I'm in my thirties now. I want to have a good time, but alcohol doesn't always have to play a role in that. In fact, I think Puff and I are way more fun sober. Probably helps that we don't have many inhibitions to start with! Good luck to all of you drinkers out there. My hope is that none turn into alcoholics (because I know someone that's teetering on that cliff) and that they will someday realize that you can have fun without a cocktail. Or at least realize that it's OK for ME to not have a drink, even if they are having one. That's my choice, and I'm fine with it.
On that note.... I sure do wish I was on the beach with a pina colada in hand. Virgin, of course. :)
Posted by Gail at 2:11 PM
Email ThisBlogThis!Share to TwitterShare to FacebookShare to Pinterest

Man! I've really missed reading your blog! I fell off this summer but I'm trying to reconstruct my reading list now that GReader is gone :-( One of the first ones I couldn't wait to get on there was yours!

I understand what you mean about drinking. I didn't start drinking until I was 24 or 25 and I have found that I really like wine. And I enjoy a good margarita every now and then, but I also have friends who every time we are together think it has to be a drunken feast. I'm kind of over it! Yeah, it can be fun but I don't know why it's always "expected". I enjoy my glass of wine a few nights a week and I'll be happy with that, thank you very much! lol- good luck with your quest. It is an important one, especially once you have little ones!!