As an expectant mother, I battle a slew of concerns and fears every single day. Behind the typical health, happiness, and well-being concerns, lies this doozy...

The fear that our one and only toilet in The Bungalow will suddenly be out of order. 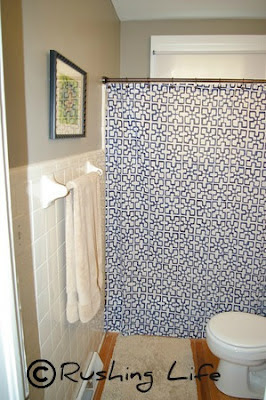 Cue Sunday evening. I was curled up on the couch, watching "Frozen Planet" when I hear Puff start screaming from the other room. "No! No! Don't! Dammit!" That was then followed by a panicked rush to the hall linen closet where he loaded his arms with our clean bath towels and ran back into the bathroom.
Thankfully, the flood was fresh water from the toilet refilling, but it was still a flood. My heart jumped into my throat. We dutifully cleaned up the water, washed the towels, mopped the floor, bleach wiped the toilet, and stowed away the plunger. Then I decided we better try flushing it one more time, just to be safe.
And the water rose and rose until Puff had to manually turn it off to prevent another catastrophe.
Immediately, I had to pee. Really bad.
I kept my calm as long as I could while Puff plungered and tinkered and stared at the scene. I eventually asked him how long until he would call a plumber. However, once a plumber was called, they hung up on Puff. Apparently they thought he was prank calling them. Most likely because he used the term "Number Two" over the phone. (I about died!)
A trip to a ghetto McDonald's at 9pm to use their bathroom was followed by a very nice plumber who came about 30 minutes post call. (Apparently that VIP membership we signed up for to save a hefty % off some tub work a few years ago paid off in the speed department!) The guy tested everything and had to use his auger twice to snake out the problem. He then informed us that we have the most basic toilet on the market and that my toilet paper is too thick.
The entire time he was there, I was texting Kimhead, trying to convince her to let me get his number for her. He wasn't bad looking, bald, and was articulate and nice. Turned out he was married. ::shrug::
When all was said and done, we were only without a toilet for about an hour and a half and I didn't have to pee in a bucket all night long. (Good thing, since I don't think we even own a bucket!) Granted, it cost us a pretty penny we don't really have, but I'm not sure we had much alternative.
I am, however, implementing a mandatory dual flush. We've got ancient plumbing in The Bungalow and I don't want to go through that panic ever again! Even if it did amuse everyone I told.
﻿
Posted by Gail at 9:25 AM
Email ThisBlogThis!Share to TwitterShare to FacebookShare to Pinterest