How to Raise Your Daughter

We all have guilty pleasures, right?

Well, one of mine is "Toddlers & Tiaras" on TLC. For those of you who don't know of this amazingly awesome train-wreck, it's a reality show about the cut-throat world of toddler beauty pageants.

It's basically a show about people who live in trailers, yet spend $50,000 a year on rhinestone-covered dresses. And wackadoodles who think their 15 month old can do the "talent" portion of the show. Not to mention spray tanning 2 year olds, waxing eyebrows on a 5 year old, and drowning little ones in Coke and Pixie Sticks to keep them happy and alert.

After several seasons, I finally found my favorite looney character on this show. Even in an episode where a mom made this ridiculous dolphin-like cackle to attract her daughter's attention and another little girl who took a REAL LIVE PONY on to the stage for her "talent," this trumped them all. I couldn't find a better picture, unfortunately, but here he is... 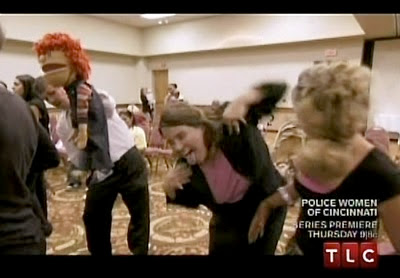 Arnold. That's right, he's a puppet. And to hear the mother speak, you would think it was like another child to them! But it gets better... not only is the giant red-headed puppet bigger than the adorable little red-headed contestant, but get this... the puppet has a wheelchair. That's right... a mother fuckin' WHEELCHAIR. And the little girl pushes the puppet around in its little puppet wheelchair. And takes it to the competition with her, where the poor, dear ol' dad holds the puppet and mimicks her dance routine with it.

This pretty much convinced me that my future daughter will totally do pageants... if only to have a wheelchair-bound puppet baby!
Posted by Gail at 1:33 PM
Email ThisBlogThis!Share to TwitterShare to FacebookShare to Pinterest