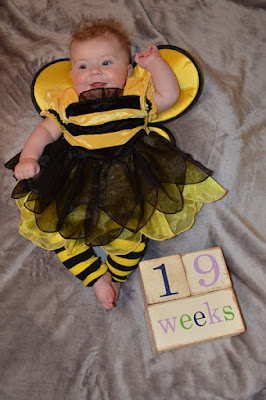 Photo copyright of Rushing Life
My sweet Healey's two bottom teeth are pretty much all the way in now, and she was a rockstar about it. No extra fussiness or anything! God bless my children whom, thus far, have been awesome at teething! And now that they are in farther, there's a wee bit less drool. For the moment, anyway.
She has been a sleeping rockstar too lately... for awhile, actually. I'd say, on an average night, she takes a short nap sometime in the early evening, and we always wake her then around 9pm to give her a bottle. Then she has slept as late as 6am on some occasions. She will typically go 6 to 8 hours at night. Yes, she's still in bed with me. But we don't have much option on that right now, without rearranging (or selling) furniture. Which I refuse to do until we make up our minds on whether or not we are moving/renovating. Which is another long post for another day.
I've been practicing with her more and more on her sitting up and her rolling over. I think the key to getting her to finally roll over might be to try to suck her snot out with the aspirator. She is not a fan.
She had her 4 month check-up this week too. She weighs in at 17 lbs. 11.5 oz, which puts her in the 95%. She was 99% in her length! She has had a little cough the past few weeks and it is just the most pathetic thing. When she coughs in her sleep, when she finishes, she makes the saddest little face. I also love her face when she takes her middle of the night bottles. When she's finished, she puckers her lips in a little duck face. She only does it when she's going to sleep after a bottle. I cling to those little things... because she's growing so fast that I know they will disappear before I know it, and I just want to soak up every second of my last baby.

Posted by Gail at 8:07 PM
Email ThisBlogThis!Share to TwitterShare to FacebookShare to Pinterest