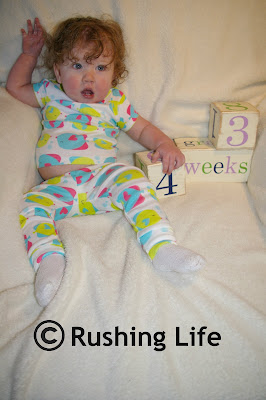 I don't really know how or why it happened, but all of a sudden this week, Bimmer decided she hates taking baths. And it sucks. She used to LOVE them... she would crawl around in the tub, splashing, playing with all her toys, and would whine when we got her out. But now she protests, pitches a fit, and screams when you try to wash her. Puff is normally on bath duty, so I'm not sure if something happened (slipped, too hot water, etc.) that I missed, but hopefully we can ease her back into loving it again.

Daycare pissed me off to no end this week by putting up a note reminding the parents to practice eating finger foods at home with the kids. I know it was directed at me. It's not like I haven't already been giving myself a ration of shit lately since she still doesn't want to eat anything healthy on her own that's not in baby food form. Apparently when she moves up to the next room, they don't feed the kids. I'm not even sure she will move up or not. (She's 1 at the end of May, they promote on June 1st... if she's walking. Part of me actually hopes she isn't walking!) Anyway... so we are now on a mission to make "real food" happen. Other than carbs and cheese.
Our first attempt was with some canned peaches (thanks to Landon's mommy's suggestion) and they were a hit. They're super hard for her to pick up on her own, but it's a step in the right direction. She actually ate something that wasn't puree! Our second attempt was blueberries. I wasn't sure she would eat them, since the baby food we had tried previously that had blueberries was not a hit. But she ate them. Puff was sure to eat some with her to show her how to chew them up. And we cheered every time she ate one. It's giving me a little bit of confidence that maybe she's finally ready to start some other things. We did give her toast for the first time this week too, and she was in bread euphoria. Just wait til we put some hummus or jelly on it for her! She's going to die!

Posted by Gail at 7:07 AM
Email ThisBlogThis!Share to TwitterShare to FacebookShare to Pinterest

One thing we did with Fritz, was to dip some bread/toast in soup, or put purees on it. It helped him get some veggies in. I don't recall when he started eating pretty much exclusively with his fingers, but Kennedy will get there. Sometimes he still doesn't want to pick up veggies on his own. Kids will get everything down on their own timeline. Don't let the daycare make you feel bad about ANYTHING!

I think she's getting cuter every day!! Love her hair! As for daycare, tell them to shove it! Every child is different and they can shove their mold up their ass just cause they don't want to do the work!