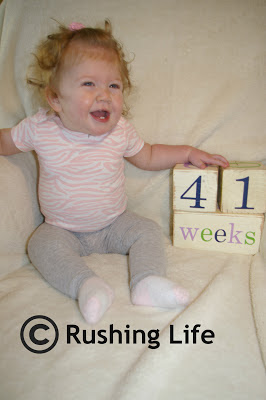 Bimmer gave us a good heart attack this week.
On Monday night, she decided she didn't want to eat and her breathing became labored and she was retracting. Her poor little belly kept going up under her rib cage. We ended up in the ER overnight for about 5 hours. They did chest x-rays (no pneumonia) and her RSV test was negative (although she probably still has it.) After one breathing treatment, they decided to try a continuous one. Since holding her relatively still and shooting medicine toward her mouth for an hour at 2am is so much fun. 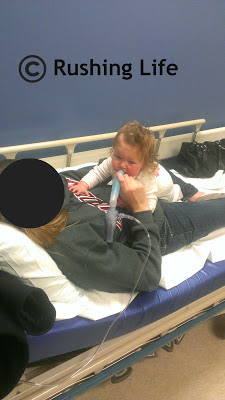 The poor girl just hasn't been herself this week. We are so ready for spring to get here and the bad germs to go away!

She missed her school pictures on Tuesday, since we kept her home, but after I saw the proofs, I was OK with her missing them. Since it was a gray, cold day, they did them inside in front of a plain backdrop. Here's hoping the ones in the fall can be outside. Not like we don't get tons of professional pics done anyway. Already preparing for her one year photos in May!
One of the cutest things she has started to do is when she is standing up on the coffee table or her little music table, she'll sometimes put all her weight on one leg and kick the other leg out to the side. We call it her "Stanky leg." I've also had it up to here with her lack of wanting to eat table food. She'll eat some.. bread, crackers, biscuits, yogurt, cheese. But she refuses to eat any fresh fruit. We've struck out now with banada, avocado, cantelope, and watermelon. And she spit out the tiny little bits of chicken I've tried to give her. And she can't quite figure out how to chew and swallow pasta. But she'll eat the fuck out of some Cheerio's. I guess I just need to keep reminding myself that she's only just been 9 months for a week or so, so I can't freak out yet.
Trust me... she's not a little girl. I'll have her 9 month stats next week. I have a feeling we're in the 90+ percentile in height and weight. But definitely weight.

Posted by Gail at 10:00 AM
Email ThisBlogThis!Share to TwitterShare to FacebookShare to Pinterest

Dude. You are the pickiest eater on earth. You can't be surprised that your daughter inherited those genes!

Poor baby! That is so scary! We are ready for Spring too! I've had enough of drs and being stuck inside this winter! And don't worry too much about the eating. She'll change her mind! Keep offering it, act like it's no big deal when she won't eat it, and then one day you'll turn around and see her shoving everything in at once!! :-)