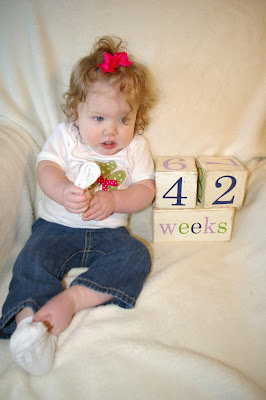 Bimmer was in no mood for photos this week
A little list of updates for ya this week...

Height/Weight: Bimmer weighs in at 21 lbs. 11 1/2 oz. and is 29 1/2 inches tall! She is in the 90+ percentile for both. Wowza!
Clothes/Diapers: Bimmer has been in 9 month sized pants and sleepers since late fall. She still rocks some of her 6 month onesies, but I finally packed away some of them to rotate in some of her 9 month ones. I'm hoping she gets into her 12 month stuff once warm weather hits though, since she has such cute stuff I'm anxious to break out! (Granted, "warm weather" is probably here already since it's been in the mid to high 60s lately!) She is still in size 3 diapers, but we have a box of size 4 ready and waiting for the size 3's to run out.
Toys: Bimmer's favorite toys right now are her picnic basket with shapes that Meghan got her for Christmas and a $1 bath book with Elmo on it that I got at Target on a whim. And suddenly after 9 1/2 months, she has found a pacifier and loves it. Granted, she doesn't actually suck on it like a pacifier. Half the time, she has it in her mouth backwards or is crawling around with it in her hand. She likes to bang it against things and will chew on the mouth part like she's gnawing. I think she must like it if she's starting to get new teeth.

Food: I've mentioned several times recently my frustration with her eating "people food." It seems like now, besides bread or cheese, anything new I give her, she spits out. She does awesome with her baby food (Plum brand being my favorite for variety) and snacks on Cheerio's and baby puffs. I see all the other kids in her class eating things like blueberries and Craisins and grits and I just feel like she's falling behind. Although, I also need to remind myself that she's 2 months younger than all the other kids in her class. She'll get there eventually. It's not like she's starving!
Sleep: For the past 2 weeks (minus the night we went to the ER) she has been sleeping through the night all but one night. She goes down about 9pm and sleeps until about 7:45am on the weekends. Waking her up for school during the week is hilarious. I can turn on all the lights, bang around and call her name and she won't even budge. Sometimes I'll even pick her up and hold her in a sitting position in my lap and she'll be totally still with her eyes shut. But when she wakes up on her own accord, she's just precious. She stretches and yawns and rubs her eyes. Then she pats my face to see if I'm awake. If I play possum she pulls herself up on the headboard and starts bouncing and dancing. So yes, as we approach the 10 month mark, we are still co-sleeping. I just keep finding excuses as to why we don't put her in her crib. We'll get there eventually.

Development: Bimmer can crawl up a storm and is getting really quick at it. She also can even pull herself up to stand on the wall, which I think is a pretty big step toward walking, since that's not easy! She dances and claps and waves. She babbles (and babbles and babbles). She bangs objects together and pulls objects out of others. She likes to open and shut books and doors.
Activities: Does being held count as an activity? She really still just wants to be held and involved in whatever Puff and I are doing. She likes to watch "Doc McStuffins" or "Snapped" (yes, she sat this week and watched it for 10 minutes... Mama was proud... lol). She likes to listen to music and dance by booty poppin'. She is really well-behaved when we are out and about and she's in her stroller or Bjorn. She also loves to play peek-a-boo. Especially with pillows or blankets. It's really one of the only times she just giggles and giggles. Her latest thing is putting everything behind her neck. That's especially fun with socks and Mommy's pants she grabs before I can take them from her.
Health: We met with the ENT this week as a follow up of her 6 ear infections she's had since Thanksgiving. The last pediatrician's visit had the doc telling us she had "a little fluid" still in her ears, but no infection. They didn't give any antibiotics, which I was grateful for, since I think she's had too many lately. Anyhoo... the ENT said she doesn't have "a little" fluid but rather A LOT of fluid behind BOTH ears. So she is definitely a candidate for tubes! They need to drain those poor girl's ears so she can hear!!! We haven't gotten it scheduled yet, but I'll be sure to keep you posted. It scares me to death, but I know it's the right thing. We gotta get this little girl healthy!

Posted by Gail at 8:51 PM
Email ThisBlogThis!Share to TwitterShare to FacebookShare to Pinterest