My grandma passed away last Friday.

I think I'm still in such a state of shock that I haven't really begun to grieve properly.

My dad called me at work about 8:30am to tell me the news. I knew when he called that early, it wasn't for anything good. I sat in a corner of the lobby at my job and listened intently as he told me what happened. I only shed a few tears. I didn't want everyone in my personal business.

Apparently, the rehab place where she was called my dad about 4am saying she was having trouble breathing. They took an x-ray and saw that she had some pneumonia. At 7am, my dad got another call that they had called an ambulance to take her to the hospital. By the time he got there a half hour later, she had already passed. Her COPD had caught up with her and caused heart failure. We were told it was peaceful.

The one thing that brings me to tears every time I mention it, is the fact that we got to take Bimmer to visit with her at Thanksgiving. Even though it caused some drama with the MIL (who can suck my big toe) and those 8 hours in the car were hard on us all, it was the best decision I've made in a long, long time. Bimmer got to spend a lot of quality time with her great-grandmother. It was amazing. I will always remember that Thanksgiving day. It was definitely a day to be thankful for.
I had a relationship with my grandmother that most people would bawk at. She knew all my dirty secrets. She even once put lotion on a "rug burn" on my back after a sexcapade in college. I would call her at least twice a month to just shoot the shit, update her on life and gossip, and get her advice on everything. She never judged. She only loved. She laughed with me. She cried with me. She encouraged me. She gave me her unwavering support. I'm not sure I could ever do anything wrong in her eyes.
Bimmer is named after her. I made that decision when I was 12 years old. When I was pregnant, Grandma kept hoping for a girl (even though the rest of us wanted a boy) so that I could use that name. When she first met Bimmer, she said they had a "heaven connection" and that Bimmer brought word from heaven from MY great-grandmother to Grandma that everything was OK and that she would see her soon. Bimmer always talked to Grandma on the phone... always. She would always get phone-shy with everyone else, but not Grandma. She was always chatting it up... airing her grievances and telling her all about her awesome life. 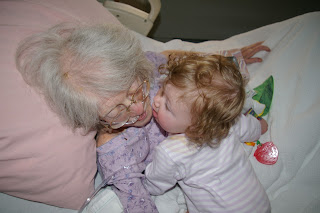 It will be crazy hard to go home for the funeral this weekend. I am not a crier. I am not a hugger. I try my best to be stoic and strong. It's going to be really difficult, but I know I don't have to be that way. Going through her house to get my stuff and anything from her that I want is going to be doubly hard. To know I may never go back there again, after spending so many afternoons after school hanging out on her couch, or nights as a child running around in the yard chasing fireflies.
I know she's in a better place. I am blessed and so thankful for all the time I had with her. She was 82 years old and lived a great life. She touched a lot of people, even though she didn't like people. (Sound familiar?) We were the same in a lot of ways. And I am going to make sure those things live on through Bimmer.
Posted by Gail at 5:18 PM
Email ThisBlogThis!Share to TwitterShare to FacebookShare to Pinterest

I'm so sorry to hear about grandma! Losing a grandparent is so hard...I've lost two now and it doesn't get easier, unfortunately (or fortunately because I guess that means we are still feeling, caring individuals). You'll be in my prayers this weekend as you come home to say goodbye!