As you read HERE, my grandma passed away recently. It wasn't sudden. We knew it was coming sooner, rather than later. But just because you know it's coming doesn't make it any less difficult.

I flew home early Friday morning and spent the day with my dad cleaning out her house. Although we didn't even make a dent. I gathered up things that were mine she was storing (like VHS tapes from my childhood and my high school letter jacket) and I packed away a few mementos of things that were hers I wanted to keep. I snagged some pieces of local pottery, some awesome old tin photos, and her teddy bear from the 1930s.

(This is where I would insert the photo I found of her as a toddler with her teddy bear, but my scanner/printer has been down for a few months and we just haven't had time to fix it.)

The funeral was Saturday morning and it's just the creepiest feeling in the world to walk into a room and see your dead grandma laid out in front of you. I seriously hate open caskets. It does nothing but give me goosebumps. I don't want that to be the last image I have in my brain of Grandma. I want to remember her alive. So I chose to stay out of the line of sight as best as possible. 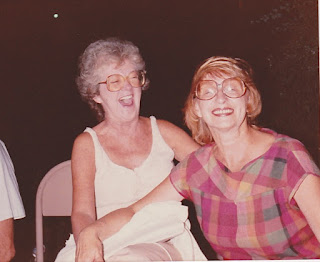 It was a morning full of awkward hugs and handshakes from people I didn't know. There was small talk about Bimmer and my job and how much Grandma meant to other people. My dad did a sweet eulogy and I didn't cry until he started talking about the bond Grandma had with Bimmer. The graveside service was quick and to the point. It was then I discussed with a family friend that I want a Viking funeral... push me out on a lake on a wooden raft and set me on fire. That would be a badass way to go.

Oh - and did I mention they played Robbie Williams during her service? Yup... his "Swing While You're Winning" album of his covers of old standards. I loved it!

Puff and I turned right back around and drove back to The Fort a few days later, but it was a good decision for me to make the trip solo. I was able to focus on getting things done and not having to worry about inappropriate timing of Bimmer's squeals during the funeral. However, I was ready to get back to her and snuggle her and squeeze her. She was the light of Grandma's life, and she is my world. I know we will all see Grandma again in Heaven one day. Knowing that and seeing Bimmer, who reminds me so much of my Grandma, keeps me at peace. I know it helped her go peacefully as well.
Posted by Gail at 9:31 AM
Email ThisBlogThis!Share to TwitterShare to FacebookShare to Pinterest