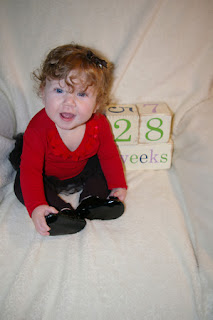 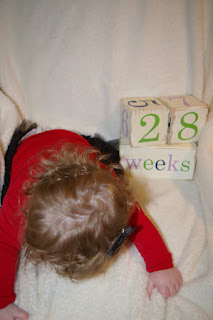 It's getting harder and harder to take photos each week of this little mover & shaker!!!
After last week's sickness, I thought I'd update on some better moments with Bimmer.
One night, when she was up in the middle of the night, she just laid beside me in bed and kept reaching for my nose. She would then rub my face and run her fingers through my hair. It was so sweet. She also has been very keen on rubbing her hand along my arm when I give her a bottle. And she's even started sometimes laying her head on my shoulder when I hold her.
She has also become a reacher... with her whole body... when we are holding her and she sees something (or someone) she wants. That squirmy little butt is hard to hold on to sometimes!
Bimmer loves pillows. It's been that way for awhile, but lately it's gotten insane. She will make it her mission to get to them on the bed. If she's laying on her back, she just scoots herself up to them and then puts one over her face. She kicks her legs and when you pull it off, she just giggles. Silly girl.
I've also noticed her staring at her hands a lot. And holding things up above her head to inspect them. I guess she's just narrowing her focus and paying attention to the fine details. Ah, my growing baby. ﻿
Posted by Gail at 7:25 AM
Email ThisBlogThis!Share to TwitterShare to FacebookShare to Pinterest