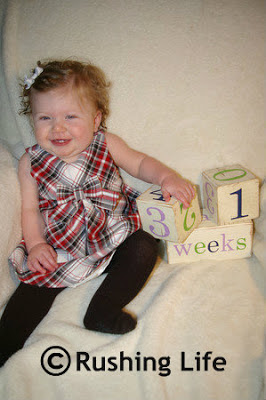 Wow, if I thought hitting 30 weeks felt like a milestone, then I had NO idea what was in store for us this week!
Besides it being Bimmer's first Christmas and another trip back up north to The Fort, she started crawling. Yup... we are officially mobile!
As you know, she has been trying for over a month to get the right momentum to get going forward. She was playing on the floor right before Christmas and I sat my laptop on the floor. That was the last bit of motivation she needed and she scooted herself across the room to it. Since then, she hasn't mastered the speed and still gets caught up on her feet sometimes, but for the most part, she's got it!
I am choosing to ignore the few times she has pulled herself up on boxes or up at the coffee table. Nope... she is not old enough to stand yet. I will push her down!
We also went through a round of RSV. After her ear infection when visiting The Fort, I got her into see her doc when we got back and she had a mild case of RSV, so we are still monitoring her slight cough. But she definitely seems to be feeling a lot better!
It was also the first week where I noticed that if I took something from her, she cried, and when I gave it back, she stopped. I probably took it away from her about 8 times just to make sure I was actually witnessing that. Oh, we are so in trouble!
Lastly, we have started trying some more "real people" food, I guess. She is now taking the little puffs pretty regularly, although she sometimes tries to swallow them hold, so we have to break them in half. Same with the little yogurt melts. She has tried tiny little bites of some bread, waffles, a croissant, plain spaghetti, and a few spoonfuls of hummus. We have officially nixed any food with carrots, since she has decided she doesn't like them. But her new favorite food seems to be mangos. Weighing in at almost 19 1/2 pounds, she definitely likes to eat!
Here's hoping next week's update isn't as long and eventful. Mommy needs her to slow down for a little while to let all this soak in!

Posted by Gail at 7:16 PM
Email ThisBlogThis!Share to TwitterShare to FacebookShare to Pinterest