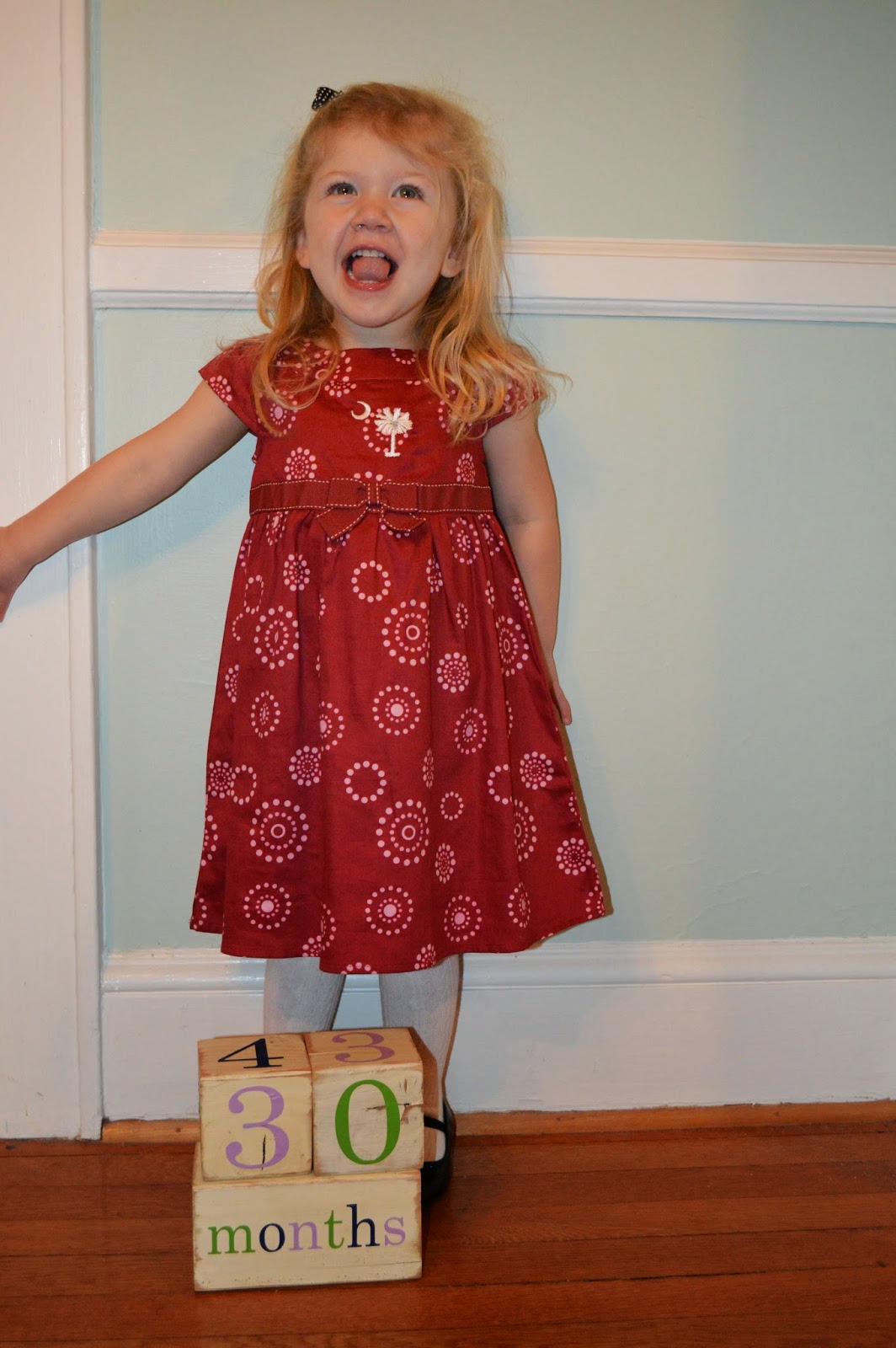 This month, she seemed much more like a little girl than a baby!
I am going to apologize in advance if I have already mentioned some of these tidbits about Bimmer in the past months. I normally write this post all month long, so I don't forget anything, but I just have had a time this month finding computer time. Hard to believe I only have a few more months of these updates! My sweet girl is growing so fast and becoming such a little person. I love her more and more every day.
* When you tell her something or suggest an activity, she is always like, "Good idea, Mommy!" She will also say she has to "ask question" or she will hand you something and say, "Let's talk about this."
* She is very into matching or realizing that things are the same. She will point out if we are both wearing skinny jeans or if we are both eating a muffin. To hear her squeal, "I got stripes on like Mommy!" is just the sweetest.
* We haven't been too great on introducing new foods to her lately, but she did recently try French Onion dip on potato chips and thought that was pretty amazing. She also has eaten some turkey at school during lunch, which she hasn't eaten in a long while. Whenever Puff offers her something new, he seems to always preface it with "I'm not sure you'll like this." I just think that's so counter-productive. I am trying to get his mindset switched so that she doesn't automatically get brainwashed into not liking something before she even tries it!
* We have been letting her eat cereal with milk on weekend mornings. It's an epic mess, but that girl loves her some Froot Loops. (Which she still calls "bloop loops" and I have yet to correct her.)
* She told me this month that she needs "2 babies." I asked what she would do with a baby and she told me "change the stinky diaper." I told her babies cry and what would she do if the baby cried? She said, "I tell her, no cry baby!" And she pointed her little finger and gave a stern little face. Oh, if that only worked. Ha!
* Puff and I need to get our act together on encouraging the potty training a little bit more. She isn't quite ready, but she is starting to show more signs than before. She tells us more often now that she has a dirty diaper. (Or if we ask her if she is poopy, she will say, "No, I'm clean. Just pee pee.") She hasn't actually used the potty in quite awhile, so I think we are going to have to come up with something to entice her to try more often. Puff started giving her treats for just trying a few months ago (she likes "butters candy" aka Reece's Pieces) and I have put a stop to that. No reward if she doesn't go. We have until May for it to click!
* Instead of saying "everybody" she says "all the bodies." And she correctly uses the term "upside down" but then if she wants it fixed, she will ask for it to be put "upside up." Makes sense, right?

Posted by Gail at 7:55 AM
Email ThisBlogThis!Share to TwitterShare to FacebookShare to Pinterest